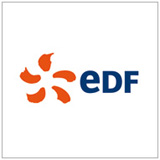 Électricité de France S.A. (EDF; Electricity of France) is a French electric utility company, largely owned by the French state. Headquartered in Paris, with €71.2 billion in revenues in 2016, EDF operates a diverse portfolio of 120+ gigawatts of generation capacity in Europe, South America, North America, Asia, the Middle East and Africa.

In 2009, EDF was the world’s largest producer of electricity.[5] In 2011, it produced 22% of the European Union‘s electricity, primarily from nuclear power:

In 2017 EDF will take over the majority of the reactor business of Areva, in a French government sponsored restructuring following financial and technical problems at Areva.[7][8][9] In July 2017, France’s Environmental Minister Nicolas Hulot stated that up to 17 of France’s nuclear power reactors — all of which are operated by EDF — could be shuttered by 2025 to meet legislative targets for reducing dependence on the power source.[10]